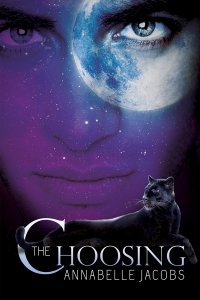 Jerath is facing the biggest problem of his life. When boys in his shapeshifter village Eladir get their fangs, they must endure a coming-of-age rite called the Choosing, so they can take on their animal form. The rite is performed on the full moon, but trouble is, the Choosing involves having sex with a girl, and Jerath’s only interested in boys. Even if he manages to somehow get through the rite, he doesn’t know if he’ll ever find a mate in his village, where opposite-sex couples are the norm.

Even worse, he may miss the rite altogether after raiders attack his home and take several young men prisoner. Jerath will need the help of warriors if he’s to free the captive shapeshifters, so with his best friend, Serim, he flees south to find aid. Along the way, they meet Meren, a handsome warrior whose attraction to Jerath is instant and very much returned. But with the next full moon approaching and available time for the prisoners to undergo the Choosing running out, Jerath’s love life is far from his only worry.